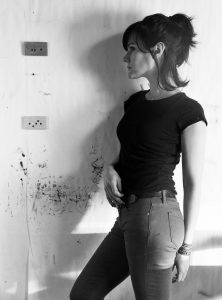 Alyssa Monks layers spaces and moments in her paintings. She flips background and foreground using semi-transparent filters of glass, vinyl, steam, water and or foliage over shallow spaces.

The tension in her paintings is created by the composition and also by the surface quality itself. Each brushstroke is thickly applied, like a fossil recording every gesture and decision, evoking the energy of the handmade object. This unpredictable surface recalls the human touch, conveying her personal empathy through the work.

Alyssa’s latest solo exhibition “It’s All Under Control” was in November – January of 2021-2022 at Forum Gallery. Monks’s paintings have been the subject of numerous solo and group exhibitions including “Intimacy” at the Kunst Museum in Ahlen, Germany and “Reconfiguring the Body in American Art, 1820–2009” at the National Academy Museum of Fine Arts, New York. Her work is represented in public and private collections, including the Savannah College of Arts, the Somerset Art Association, Fullerton College, the Seavest Collection, The Bennett Collection, and the collections of George Loening, Eric Fischl, Howard Tullman, Gerrity Lansing, Danielle Steele, Alec Baldwin, and Luciano Benetton. In 2015, Alyssa gave a TED talk at Indiana University discussing her recent work, which is featured on TED.com. Recently, she was named the 16th most influential women artist alive today by Graphic Design Degree Hub. Her work was featured heavily in season 6 of the FX television series The Americans in 2018.

Born 1977 in New Jersey, Alyssa began oil painting as a child. She studied at The New School in New York and earned her B.A. from Boston College in 1999. During this time she studied painting at Lorenzo de’ Medici in Florence. She went on to earn her M.F.A. from the New York Academy of Art in 2001. She completed an artist in residency at Fullerton College in 2006 and has lectured and taught at universities and institutions worldwide. She continues to offer workshops and mentorships and lectures regularly.

Seed, John. Alyssa Monks Captures the Energy and Anxiety of Being in Paint, Hyperallergic, September 21, 2022

Stamberg, Susan. ‘Drawing Inspiration’ From Artists Who Make Their Mark On Paper, Not Canvas, NPR, April 22, 2021

INTERVIEW Thomas, June, The Real Artist Behind ‘The Americans’ Fictional Painter Talks About Her Experience on the Show, Slate, April 6, 2018, podcast

Ajaka, Nadine, The Rustic Renewal of a Brooklyn Artist, The Atlantic, October 20, 2015

Don’t These Look Like Photos? When You Learn The Truth, You Will Be SHOCKED, The San Francisco Globe, August 2014

Past Contributor: Alyssa Monks, Poets and Artists, May 2010

Stunning Art that Looks Like Photos, UK Metro, online and in print, September, 2009